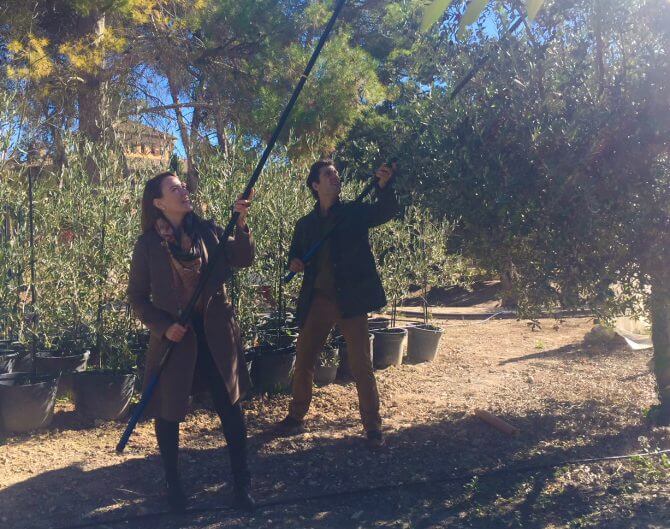 In this post, we’re going to speak at length about pole -beating the olive tree and how it should be done correctly to cause absolutely no damage to the trees and obviously  not endanger the branches  or the area called ‘muestras’ which is where the the fruit for the following harvest will be found.

Beating the olive tree with a long pole is an ancestral technique which has been used by producers for centuries.  We could define it as a  type of  ‘combing’ the tree so that the olives fall onto the  blankets placed underneath.

It isn’t necessary to say that this technique has been substituted by machines or electrical beating poles, some of which even have a type of inverted umbrella set in motion by vibration of the trunk , preventing the olive from hitting the ground and from the operators damaging the fruit while it’s being collected from the tree.  This type of harvesting is obviously much better, first of all because if the olives are stepped on they start to age immediately  and secondly, because it reduces considerably harvesting costs since it can be done more quickly, all of which in the end, benefits  the quality of the extra virgin olive oil.

At Masía El Altet, we use this new technology to collect the olives.  As we said, it’s necessary to do it like this to ensure the quality of this foodstuff, a foodstuff which let’s  not forget is at the base of the healthy  Mediterranean Diet.

But where machines can’t be used is where it’s necessary to beat the olive tree with hand -held poles. And so as not to damage the branches of the tree, certain precautions have to be taken.

Fifteen per cent of the plantation of this estate is collected in this way since the tractor cannot be used due to the fact that the trees are  on the very hillsides of the Sierra de Mariola.

Techniques for  beating by hand

Beating the tree by hand is not a task which requires physical strength.  Our greatest helper is skill.  It is also necessary to have a pole which is well adapted to the physical conditions of each person.  In this way, it can be handled efficiently.

What it involves  is moving around the tree  beating the branches where olives are to be seen.  But it has to be done quickly because if not, the work is not financially viable especially when we’re talking about large areas of land.

It’s not a problem and it’s no cause for concern if a few olives remain on the tree.  After beating the tree with a pole, it’s almost impossible not to leave some.  In the same way, it’s not necessary to go after each and every one since the time spent doing so would make the task unproductive.

The correct  force needed to beat the tree

The tree shouldn’t be hit too hard – something which could damage the branches – nor too gently – which would mean the fruit wouldn’t fall.  So what is necessary is to hit the tree with the correct force. It’s obvious that for a beginner it might be a bit complicated to know how hard to hit the tree. But this is something which can be learned quite quickly.

The force with which the tree is hit depends also on the thickness of the branches.  Greater force is used with bigger branches than finer ones.  But it is very important never to break the branches where the future fruit growth points  are.

The importance of direction in beating the olive

What we’re doing is combing the tree.  We could even say that we are carrying out a type of natural pruning, the branches and the dry leaves will fall.  We have to try to get the olives to fall sideways, at an angle.  If we hit the tree straight on, we run the risk of breaking a lot of branches.

It  is also true that there exist varieties of olive tree which are more difficult to hit with  the pole than others.  Among the most complicated are Arbequina and Blanqueta.

This is due to the fact that these varieties of olive which are smaller   are formed with less distance between the branches, something which prevents the pole from being able to move with   complete freedom.

Others such as Picual, Hojiblanca or Genovesa of greater size and with a more space between  branches means that beating  with the pole  is a pleasurable activity and hearing the olives falling onto the net is pure bliss.

So, in conclusion, to beat the tree with a pole the way it should be done, it’s necessary to follow a series of techniques which is what we’ve spoken to you about in this post.

It’s manual work which at Masía El Altet, we do in those places where machines can’t gain access.

In this work, skill is far more important than strength.  Anybody can do it if they have the correct pole to hit with precision in just the right place.

And it’s very important to know where to hit so as not to damage the branches or the future fruit growth points   so as not to endanger the following harvest.  Looking after the olive, treating it with love and attention is the first step in obtaining an extra virgin olive oil of very high quality.  We must obviously also take transport into account.  The shorter the time between picking and arrival at  the oil mill, the better.

How do you hand-beat the olive tree? Would you add any advice to what we’ve already told you in this post? If you would, do so  in the comments section.

Did you like this post? Has it been useful? If your answer is ‘yes’, don’t hesítate to share it with friends and family.  We’d love you to do so.