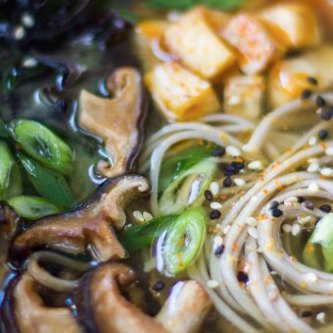 This French onion soup has an exotic touch thanks to the kombu seaweed which, besides having a good aroma, also contains many beneficial properties and it’s widely used in vegan menus.  It stands out for being rich in fibre, vitamins and minerals.

The recipe also includes shoyu, the first soy sauce to be consumed in the West, a sauce with a less intense flavour than other sauces because it contains a lower quantity of soy beans and salt.

And that’s it. As you’ve seen, it isn’t a very complicated recipe but it does require a bit of time because it’s necessary to get the texture of the onions right.

When you make it, apart from being very nutritious, you’ll notice that oriental touch which the kombu seaweed and the shoyu give it.

A taste which you’re very unlikely to be accustomed to but which we’re sure you’ll love.