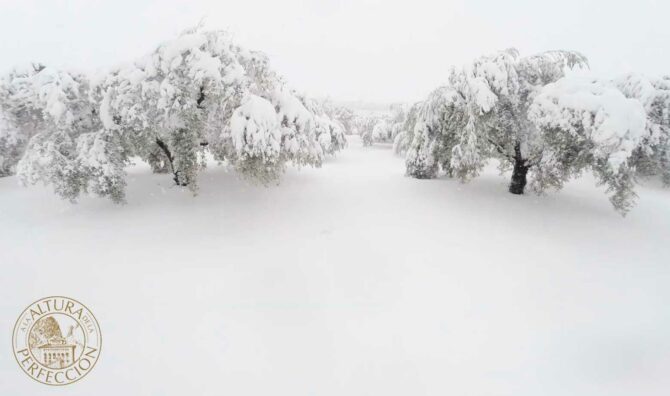 Do you want to know the effects that frosts have on olive trees? How is the olive harvest affected? If you’re interested in this topic, carry on reading this post because we’re going to tell you everything about it.

The effects of frosts on olive trees are obviously very harmful if the fruit has already appeared and the principal consequence is that quality oils won’t be produced, which is what we look for at Masía El Altet.

If the frosts arrive in winter and the temperatures are below zero, that is something positive because moulds and bacteria which are damaging to the tree die.

Fly larvae also die which means that afterwards, we won’t have so many flies. At the same time, what the cold does  produce is increased flower induction.

Flower induction arrives in spring and if the tree has been cold in winter, the buds will be greater.

The effects of frosts on olive trees

If the frosts have been severe, that’s to say, lower than minus 10, the olive tree can even die.

What’s important above all, is the length the frost lasts.

If the frosts are short, there won’t be any negative effects, that is to say, the night-time temperature is minus 5 but during the day, the temperature is over 10 degrees, there wouldn’t be any consequences since it will only have been at minus 5 for about 5 hours.

The problem is if the tree has spent 20 hours at temperatures below zero.  It’s in that situation that you have to start worrying. This is when we say that there has been extreme cold.

The olive is a vey resistent tree.  In fact, we can find many olive trees more than a thousand years old.  But it only tolerates the cold up to a certain limit.

Masía el Altet’s olive grove is at the very limit.  That is to say that if if were a little colder, it would be impossible to have olive groves.

In fact, our area is not an area typical for olive trees as could be the province of Jaén, with its more benevolent climate.

Where we are, in the Mountains of Alicante, we’ve had 9 days with temperatures below zero during the month of January 2021. That is very cold.

Frosts in olive trees can cause the bud to ‘burn’ when it’s forming, with spring around the corner and that means that the harvest will be diminished.

Changes in leaf colour and leaf-fall can also be caused.

Frosts and variety of olive trees. Their resistence

We have 6 varieties of olive tree at Masía El Altet. Picual, Arbequina, Changlot Real, Alfafarenca, Blanqueta and Genovesa. There can be no doubt that the most resistent to the cold is the Alfafarenca.  Followed by the Picual and the Arbequina.

When it’s ‘frightened’ it’s when the temperatures are near 0 degrees o even minus 1. When the frost has been very severe, it wrinkles completely and the olive looks like a raisin.

The climate in the Mountains of Alicante. Conditions for the production of oil

Nevertheless, for late harvests, it isn’t the perfect area. On the contrary.  Much better are warmer areas like Jaén, nearer to the coast

We have our olive grove near thecoast but we’re at a very high altitude.

For the grower, it’s a complicated area because you have to keep an eye on the tree. But it’s also true that it gives us great satisfaction with the quality of the juices we obtain. 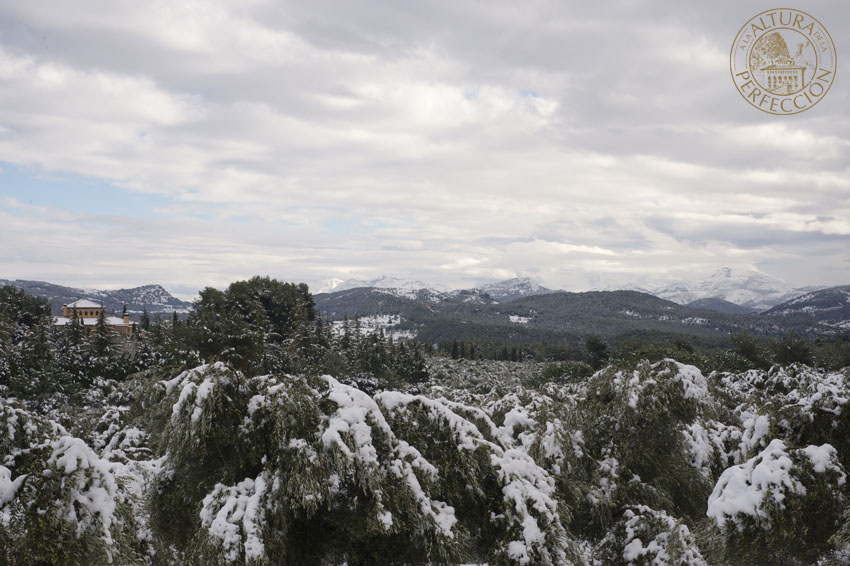 It’s good for it to be cold at pruning time (but not extremely) because the olive tree is at a vegetative standstill  and it’s the best time to carry out pruning.

Pruning is elimination of wood. The tree suffers but if it’s at a vegetative standstill, the suffering is much less, practically inexistent.

It’s good for there to be frosts when the tree is at a standstill but principally, because it doesn’t alter the climate. Let us explain.

The olive tree doesn’t know what season of the year we’re in. The tree takes its cue from temperature and relative humidity.

In winter, it has to be cold and in spring, the maximum temperatures have to be around 25 degrees and the minimum around 7 for the tree to continue working and so be able to generate shoots and for flowering to reach an optimum.

If there are frosts, nothing is done.  It’s certain that there are producers who put a type of signal to be able to avoid them during harvesting.

But at Masía El Altet, we harvest the olives in October and during that month, it isn’t normal for it to freeze.

The worst thing that can happen is for it to freeze when the plant thinks that it’s spring. The bud burns and the production of olives is much less or almost non-existent.

What can be done to minimize the damage frosts cause to olive trees?

Leaf fertilizer and copper can be applied to the olive trees to avoid the possible damage caused by frost.

But the best thing is for it to be cold in winter and for pruning to be carried out at low temperatures. When the tree is at rest, it also has to be cold and during spring, rain is welcome but it’s important that there are no frosts.  That would be the worst thing to happen.

In this post, we’ve told you about some of the effects which frosts have on olive trees.  Evidently, the climatology is of the greatest importance for the extraction of extra virgin olive oil of great quality such as what we obtain at Masía El Altet.  You have to bear in mind that the tree doesn’t take its cue from the seasons, it takes it from temperatures and humidity.

Have you found what we’ve told you in this post about the effects of frosts on olive trees interesting? If your answer is yes, we’d love you to share it through your social networks.