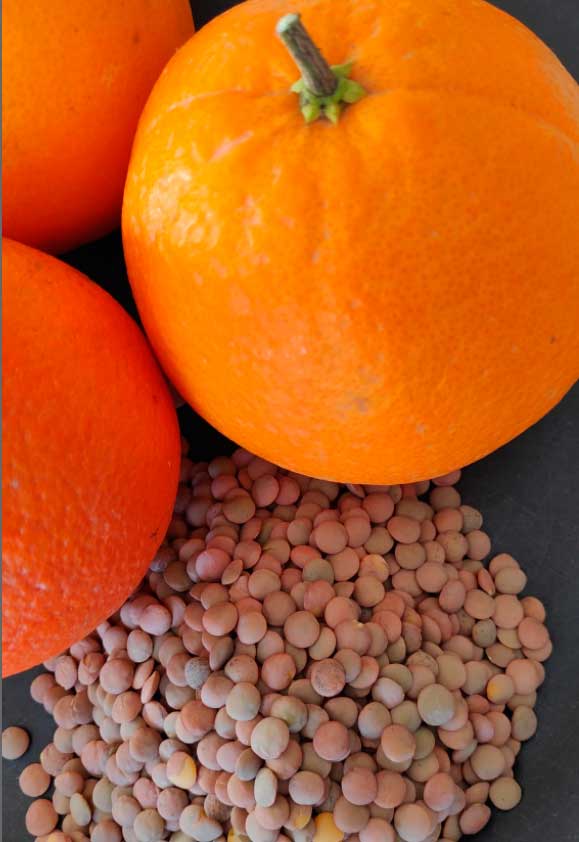 This lentil and orange vegan salad is incredibly healthy.  Two foodstuffs that combine perfectly and which form an indispensable part of our Mediterranean diet.

Pulses, looked down upon for many years, have found a prominent  position again among those people whose aim it is to eat  healthily.

And oranges, what can we say about them, so Valencian and so full of flavour. Fortunately, at Masía El Altet, we have them very close by.

They’re not only cultivated in the fruit-growing area of Valencia but we can also see them and in abundance in the Marina Alta area of Alicante, to be more precise, in the Vall de Gallinera, only a stone’s throw from our olive groves.

Take note of the ingredients and the preparation and you’ll see that you’ll be able to eat very healthily with very little effort.

As you can see, an incredibly simple and nutritiuos recipe thanks to the brown lentils

By the way, brown lentils are a variety of lentil also known as ‘Francisan lentils’.

It differs from the others because of the brown colour of the skin and the medium size (between 4 and 5 mm in diameter) of the characteristic lenticular-shaped seed.

Having been cultivated and cooked for centuries, it was, along with the chick pea, one of the basic pulses of the Mediterranean diet, only to be pushed aside by the arrival of the bean.

Today, back on centre stage, this variety even has a GPI in the lands of Castile, in Tierra de Campos to be more precise.

Its size and fine skin allow it to be cooked directly without the need for soaking, normally a requirement for pulses, reducing preparation to nothing more than washing.

Another advantage is that the skin doesn’t separate from the lentil on cooking, something which makes it ideal not only for stews with more or less liquid, but also for salads, as you’ve seen here in this recipe.