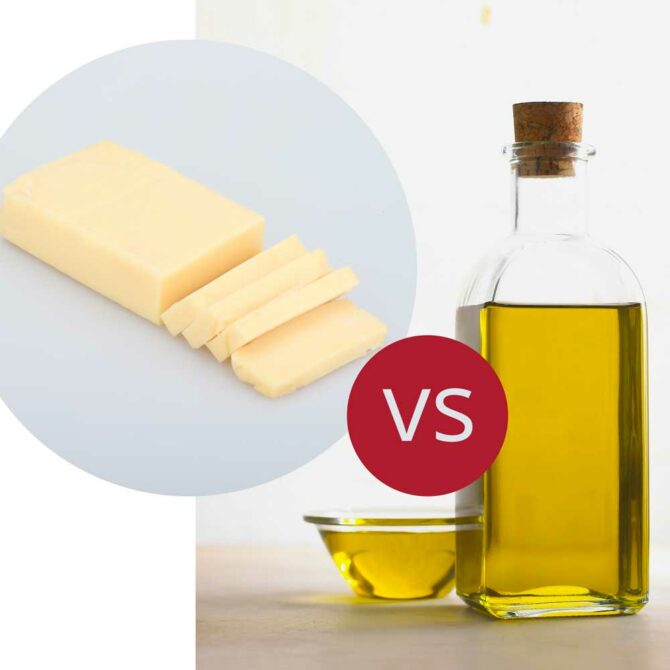 Which is better for cooking? Olive oil or butter? We’re sure it’s a question you’ve asked yourself many times and which we’re going to answer in this post.

Having said that, you can imagine that when it comes to choosing between olive oil and butter, we’re always going to go for the first option.

Nothing can compare with the aroma of extra virgin olive oil, the authentic juice of the olive and all of the beneficial properties that it has for the health of human beings.

Is extra virgin olive oil recommended for cooking? Of course it is. What’s more, at temperatures below 180 degrees, it conserves the flavour of foodstuffs much better.

But what is certain is that we’ve often seen, above all in North American films and series, that butter is used on a huge number of occasions for cooking.

Let’s say that cooking with butter is something typical in Anglosaxon countries. England, the United States and some in the north of Europe usually use butter for cooking.

That’s not the case with Mediterranean countries such as Spain, France, Italy or Greece where it’s usual to cook with olive oil.

Olive oil or butter. The differences

Let’s look at some of the differences between olive oil and butter.

The first is that olive oil is a vegetable product which comes from olive trees and their olives and which is formed for the most part by monounsaturated fats.

That’s why, with monounsaturated fatty acids, we can say that the oil is a liquid fat when at room temperature.

Since it’s a fat of vegetable origin, it poses no problems for vegetarian and vegan consumption.

On the other hand, butter is a product of animal origin.  It’s made from the cream that comes  from cows’ milk. For that reason, vegans don’t eat it although it’s true that it’s permitted for vegetarians.

As far as its make-up is concerned, butter is formed from saturated fatty acids which are responsible for its being solid at room temperature.

But one of the most important differences is that butter contains cholesterol and olive oil doesn’t.

Yes, it’s true that butter wins where vitamins and minerals are concerned if we don’t include Vitamin E, which is more abundant in olive oil.

Olive oil has more calories that butter.  That is due to the simple fact that olive oil is formed of 99.9 per cent fats while butter contains 83.4 per cent fats. 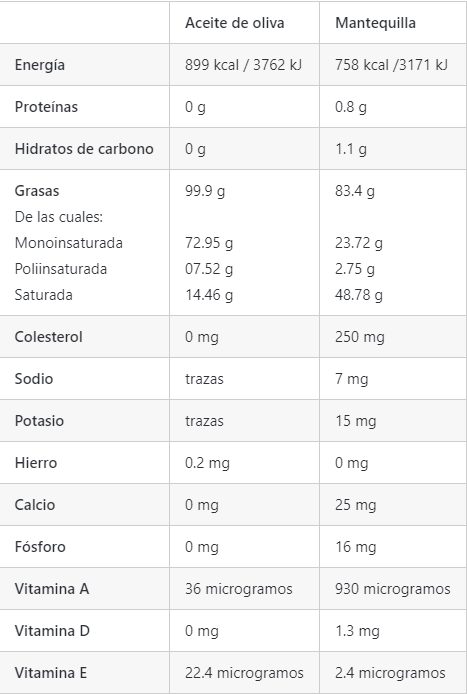 And for cooking? Olive oil or butter?

It’s true that in Spain, it’s not very normal to cook with butter and when you consider what we’re going to tell you now, for good reason.

Butter is a foodstuff which contains less fats than olive oil and which, on the other hand, contains other substances such as proteins and a considerable amount of water.

And that’s what’s important, the amount of water that butter contains. That means that it starts to smoke at a much lower point than olive oil.

Allow us to explain. Butter burns far more easily and resists high temperatures much worse and for that reason, it doesn’t respect the flavour the food has.

Taking this into account, we can say without any shadow of a doubt that olive oil is much better for frying and cooking.

Butter should only be used in dishes which don’t require high temperatures and in cold dishes.

In fact, some restaurants use butter for cooking because it makes it possible to increase the flavour of foodstuffs which are of poor quality in order to give them a different taste.

That is to say, that the client is ‘deceived’ up to a point because what they’re eating is influenced by the flavour of the butter, something which would never happen if olive oil is used for cooking. And even less so, if extra virgin olive oil is used, which is of higher quality.

And which is more fattening?

Another thing which you might be asking yourself is if choosing one or other is going to have an effect on your weight. If one of the foodstuffs is more fattening than the other.

We’ve said that olive oil contains more calories than butter.  That’s true. But what is also true is that for cooking and for all other uses, it’s necessary to use a greater quantity of butter than olive oil.

In the end, the ‘weight battle’ is a draw although it’s true that the battle is usually won by olive oil since you use it in less quantity.

One example. On a piece of toast, you need less olive oil than butter for it to be really tasty.

But, watch out. Both oil and butter are fats and they should be consumed in moderation.

Another thing. In this post, we’ve spoken about butter. If you do use it, make sure it’s real butter, not margarine or other substitutes which you see on supermarket shelves.

We hope that in this post, we’ve cleared up some of the doubts about whether olive oil or butter is better. We continue to insist that olive oil is at the centre of the Mediterranean diet and that we’ll always opt for olive oil.

What do you usually use for cooking? Olive oil or butter? What are your reasons for it? Please tell us about them in the comments section.

Have you liked what we’ve told you in this post? Have you found it interesting? If your answer is yes, we’d love you to share it on your social networks.