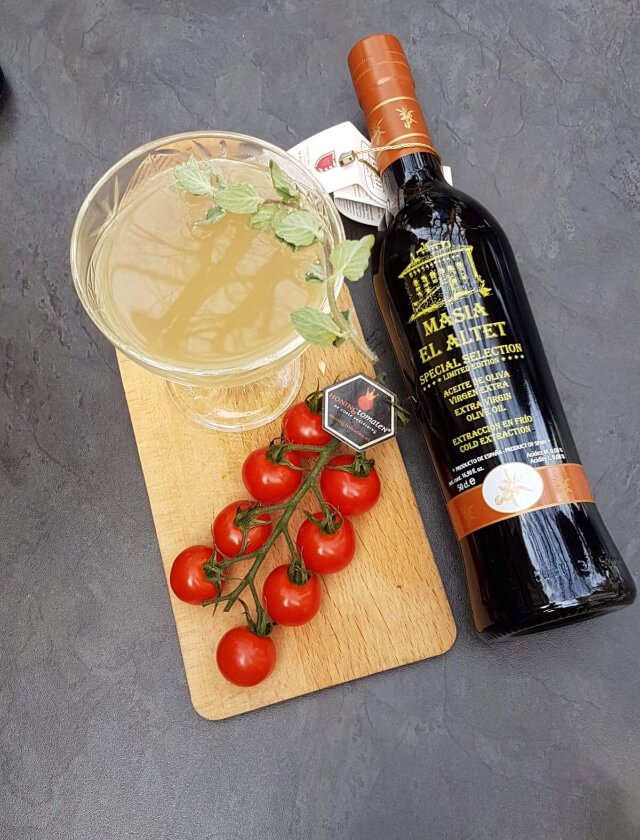 In our gastronomic club, De Smaak Ambassade, we’ve been thinking about how to do our bit for sustainability and the environment.  That is to say, how can the cocktail sector help improve our environment?  So we started investigating as to how, from within our profession, we could help take care of our planet.

In fact, we have already taken several steps to look after our planet.  For example, we no longer serve our cocktails with a plastic straw and have also stopped using paper serviettes. We substituted the first with metal or biodegradable ones and the second with coasters which can be used over and over again.

We have also been working with non-perishable products. To be more precise with liqueurs which provide perishable products.  In this way, we can increase the lifespan of our ingredients and we achieve ‘zero waste’. That is what we apply when we develop our World Class.

We have recently been working on a project which has olive oil as at its centre.  For it, we have used a technique called ‘fat-washing’.  With this technique, we can infuse the flavour of olive oil with the liqueur and using liquid nitrogen/cold temperate, we then freeze it.  This solidification permits us to separate the oil from the spirit.

You  already know that infusion is extracting the flavour of an aromatic substance  in a hot liquid.  It is heating a liquid with another substance, so that the flavour and even the colour of that substance remains in the liquid.  For example, when we make a rice pudding, we infuse the milk with cinnamon and lemon, giving the flavours of these two substances to the liquid, in this case, the milk.

In this way, the aromas of the olive oil remain in the liqueur without the necessity  to drink the oil.  With this technique we also have an olive oil which contains a liqueur.  This spirit can then  be used in other dishes.  So, in this way, we have achieved what we set out to do:  produce zero waste.

The oil we used for this experiment was of a single variety with  notes of green apple, green tomato, figs and citrus fruit which in our opinion, paired very well with the young Don Julio Blanco Tequila.

The ‘fat-washed’ Don Julio with olive oil turned out  excellent with the creation of buttery and fruity aromas.  We could obviously use the magnificent olive oil infused with Don Julio on our tomato salad.

We looked at what flavours we could combine to enhance the liqueur and the first one to come to mind was that of the pear since it is an aroma very easily recognizable in Don Julio.  We had already used pear in one of our dishes.  What we hadn’t used was the peel and the core.

The following step was to make use of the peel.  To do this, we took note of an old Mexican tradition called Tepache.  This technique consists in leaving pineapple peel to ferment in water for 3 or 4 days to produce a drink both tangy and refreshing.  We used the same technique substituting the pineapple peel with that of the pears.

We decided to put the pear cores into vinager, which we would convert into a ‘shrub’ afterwards.  To sweeten the ‘shrub’, we used fig compote which is a well-known way of preserving fruit  to get the most out of it and at the same time, without producing waste.

After that, we wanted to introduce umami flavour and the aroma of tomato.  We realized that the tomato which we used came on the vine.  However, we had never thought about using the vine itself which is nevertheless, the part of the tomato which produces the strongest aroma due to a glycoalkoloid called tomatine which  wards off insects  and which is only to be found in the stem and leaves and not in the fruit itself.  For this reason, from the vine, we made a bitter with oregano from our herb garden.

To give the cocktail a name, we looked back at the history of Latin America and discovered that it was Franciscan monks travelling from Spain to Latin America who had taken cuttings from olive trees with them  and who introduced the fruit into the missions in Mexico.  And that ¡s why we decided to  name it  ‘Olives on a Mission’.

Preparation of Olives on a  Mission