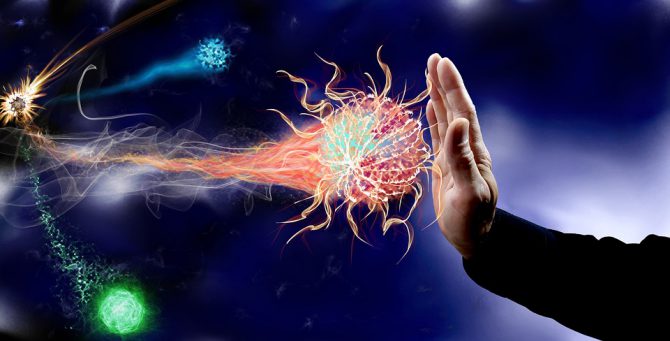 Is Extra Virgin Olive Oil (EVOO) beneficial in strengthening the immune system? Can it help to fight viruses, bacteria and infections?

In this post, we’re going to answer these two questions basing what we say on some studies.

It goes without saying that even if EVOO is good for strengthening the immune system, it still hasn’t been widely demonstrated and the most complete studies date from the year 2010.

As a result, there is still a lot to be done in this field which is revealing itself as  extremely important in the fight against Covid 1,9 which has caused a world-wide health crisis of unimaginable  proportions.

There can be no doubt whatsoever that extra virgin olive oil is an incredible foodstuff providing multiple beneficial properties for health.

Here we could list hundreds and hundreds of studies. It’s the foodstuff around which revolves the Mediterranean diet, the healthiest way of eating in the world. And there can be no doubt about this last fact either.

Consequently, we can say that EVOO is one of the key factors in prevention. According to studies like Predimed, it plays a key part in preventing cardiovascular diseases. But is it equally effective in strengthening the immune system?

What is the immune system?

It’s extremely important to strengthen the immune system because if it’s not in optimum condition, it’s much easier to fall prey to all types of illnesses.

It’s like an army which fights courageously to prevent external agents from entering the human body in the form of viruses or bacteria which can make it fall ill.

Food plays a key role in keeping the immune system on top form.  That’s our best defence. EVOO never ceases to be a factor and one of the most important ones along with fruit and vegetables.

What studies say about EVOO and the immune system

As we said at the beginning of this post, there aren’t many studies about whether EVOO is good for strengthening the immune system. The most serious one, and the one which is quoted by all medical publications is the one carried out by the University of Jaén in the year 2010 and which is called ‘’Olive oil, the immune system and infection’’ (“Aceite de oliva, sistema inmune e infección”) and which you can find  on this link.

What this study does is demonstrate very clearly that the functions of the immune system are conditioned by diets that contain olive oil.

Evidently, the higher the quality of the olive oil, the better.  What you should go for then is extra virgin olive oil, the purest and the one which maintains all of its properties intact.  This is the oil which you can find at Masía El Altet.

The study maintains that olive oil is an element of vital importance from a strictly immunological point of view.  It also demonstrates again that it’s of great importance in curing problems of inflammation.

So to sum up, taking olive oil on a regular basis as part of your diet provides protection from agents which can cause infection.

So once again, what has to be insisted upon is the necessity of having a balanced diet which revolves around olive oil and is rich in fruit and fresh vegetables without forgetting pulses, pasta and bread.

What we’re saying is that once again, we’re seeing the great importance of following the Mediterranean diet as opposed to a diet called ‘fast food’, with ready-prepared meals or ultra processed food, which are responsible for many health disorders such as carrying excess weight and obesity.

Is EVOO sufficient for strengthening the immune system?

We have to be honest.  Although we’re producers of extra virgin olive oil, we can’t claim one hundred per cent  that by taking in oil, we’ll manage to strengthen the immune system  to the point that picking up disease will become only a remote possibility.

And even less so, can we claim that our body, with olive oil, will not be affected by Covid 19. It would be foolhardy not only for us to make such a claim but also the scientific community. But we will continue to insisto n the fact that you’ll always enjoy better health if your diet revolves around olive oil. No scientist, no doctor specializing in dietetics and nutrition  is going to deny this.

So then, besides taking in EVOO, what should you do to strengthen your immune system? We’re going to give you some advice, obviously basing  what we say on scientific studies.

Moderate exercise every day is more than sufficient to strenghten the immune system. A study carried out on 1000 people and published in the British Journal of Sports Medicine indicates this.

Keep an eye on stress

Many other studies relate the weakening of our defence system to stress. The National Academy of Science (La Academia Nacional de Ciencias) carried out a study on 300 people and those who presented a higher level of stress were also more likely to catch more colds and with worse symptoms.

Besides, people who are suffering stress are less likely to pay attention to other healthy habits such as eating well and getting sufficient sleep, things which can affect  immunity.

It’s complicated to control stress. Exercise also helps but it’s possible that it may even be necessary to go to a doctor specializing in this type of problem to get rid of the anxiety that it causes. Unfortunately, stress is becoming more and more common in our society.

Doing exercise, keeping an eye on stress and having a balanced diet. These are the three key factors for strengthening the immune system. Extra virgin olive oil takes on special importance  as an indispensable element of a balanced diet.

So when all’s said and done, EVOO is brilliant for strengthening the immune system and increasing our defences. But on its own, it’s incapable of carrying out that function. Taking olive oil has to go hand in hand with the other points we’ve just mentioned.

Do you take extra virgin olive oil on a regular basis, do you have a balanced diet, are you active and do you control stress? Tell us about your routines in the comments section.

Have you found what we’ve told you in this post interesting? If the answer is ‘yes’, would you share it on your social networks?