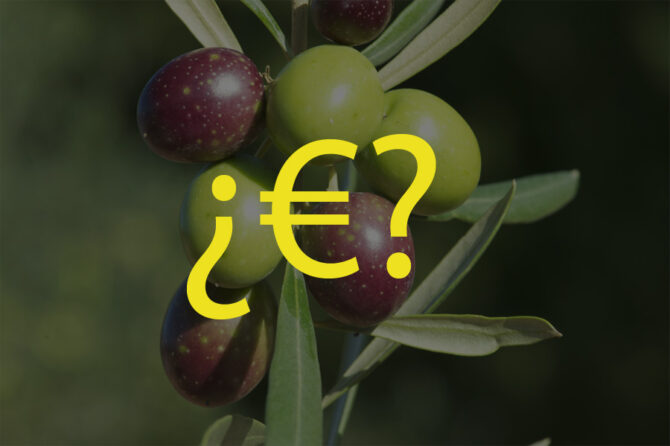 What does an increase or a decrease in the price of olive oil depend on? What are the factors that influence this?  Would you like to know the answers? Read this post.

Before we say anything more, we’d like to say that at Masía El Altet, we produce extra virgin olive oil of the highest quality. We have our own groves, our own oil mill and we control our production.

We’re saying that because it’s us who set the prices of our bottles of extra virgin olive oil and, if you’re already one of our customers, you’ll have noticed that the prices of our oil don’t fluctuate as can happen with the rest of oil which is on sale on supermarket shelves.

Having said that, what factors influence the price of olive oil at worldwide level? As we’ve put in the heading of the post, we’re going to analyse it.

If you’re the slightest bit curious, you’ll have seen that the price of olive oil increases and decreases. It has to be said though that in recent years, it’s more often the former than the latter.

The price of olive oil behaves as if we were on the stock market because, in reality, everything revolves around supply and demand.

Causes for the variation in the price of olive oil

We’re going to analyse these causes:

Production, a key factor in the price of olive oil

Production and more specifically, a fall in production, is probably the key factor in variations in price.

This fall is usually associated with bad harvests but sometimes, climate change is already being pointed out as the cause of those bad harvests. If climatological conditions vary, the tree suffers.

If the decrease in production only ocurs in one country, it can be compensated for by the rest of producing countries. Large producers of olive oil are Spain, (which stands out in terms of  importance), Greece and Italy.

When bad harvests affect these three countries, things get more complicated and an increase in the price of olive oil is inevitable.

An increase in the consumption of olive oil

What is being noticed in recent years is that there exists a greater consumption of olive oil in countries where it wasn’t normal to use it in the past.

Campaigns have been carried out so that the population in general increases its consumption of oil and abandons other fats which are far worse for people’s health such as butter for example, which is used for cooking.

This is another of the factors which is having an impact. The market is demanding higher and higher quality and this quality is achieved – as is the case at Masía El Altet – by harvesting the olive when still green as a way of achieving extra virgin olive oil of far greater quality.

We’re going to repeat what we’ve already said. Quality is what consumers are looking for and we have adapted to comply with their demands.

But of course, the yield of the olive harvested when green is far less than that of a ripe olive.

Greater quality is extracted, that’s true, but also far fewer litres of oil, a factor which can have an influence on the price of the olive oil. The number of agricultural areas harvesting the olives when still green is constantly on the increase.

For all of these reasons, we can say that oil is a complex market which behaves like the stock market, with continuous variations in price.

At the moment, there are many systems for controlling it thanks to new technologies and more particularly, Internet. The price of the olive oil can be followed almost to the minute following Internet sites such as Poolred en España.

This is a very transparent site, everyone having access to its information, and where all of operations to buy and sell can be seen at the very same moment they’re taking place.

On the large markets, the prices for three types of oil are taken into consideration: virgin, extra virgin and lampante.

Extra virgin is the authentic juice of the olive, the one with the greatest flavour, which preserves all of the beneficial properties that oil has for health and which is the only type of oil that we produce on our Masía El Altet estate.

So, this is all that we wanted to tell you about the price of olive oil and its fluctuations.

And what’s your opinion about the price of olive oil? Do you think that it’s a product which is expensive? What do you give most importance to? Quality or price? We’d love to know your opinion.

Have you found what we’ve told you interesting? If your answer is yes, we’d love you to share it on your social networks.