The soil and the climate are some of the factors which influence olive tree cultivation.  But they have nothing to do with the farmer.  They can’t be controlled at all.  The climate and the farmer will leave their mark on the personality of extra virgin olive oils.

So in this post, we’re going to explain all of the stages in olive tree cultivation and in particular, those in which we can play a decisive role to ensure we find on our olive trees olives which give us the best extra virgin olive oil in the world.

In the areas which are within the control of man are to be found fertilization or irrigation systems.  Also, light pruning which, for Masía El Altet, is one of the most important moments in the year and which we’ll look at more carefully at the end of this post.

Olive tree cultivation begins at the moment of inflorescence

Everything begins with inflorescence.  It’s the beginning of the reproductive cycle and on our estate, this phenomenon begins when the temperatures start to rise and can last until the month of April. However, in general, in the greater part of the Spanish olive growing areas, this occurs at the end of February  or beginning of March. This is the stage during which the buds start to sprout.

Since our estate is situated at 850m above sea level and given the low winter and summer temperatures, the whole process takes place later.

Here, we have to distinguish between the growth buds and flower buds.  The first will become new stalks with new buds; the second are responsible for the olive tree’s reproduction in the following stage.

For inflorescence to take place correctly, we use state-of-the-art fertilizers which not only ensure growth but also preempt the appearance of diseases. 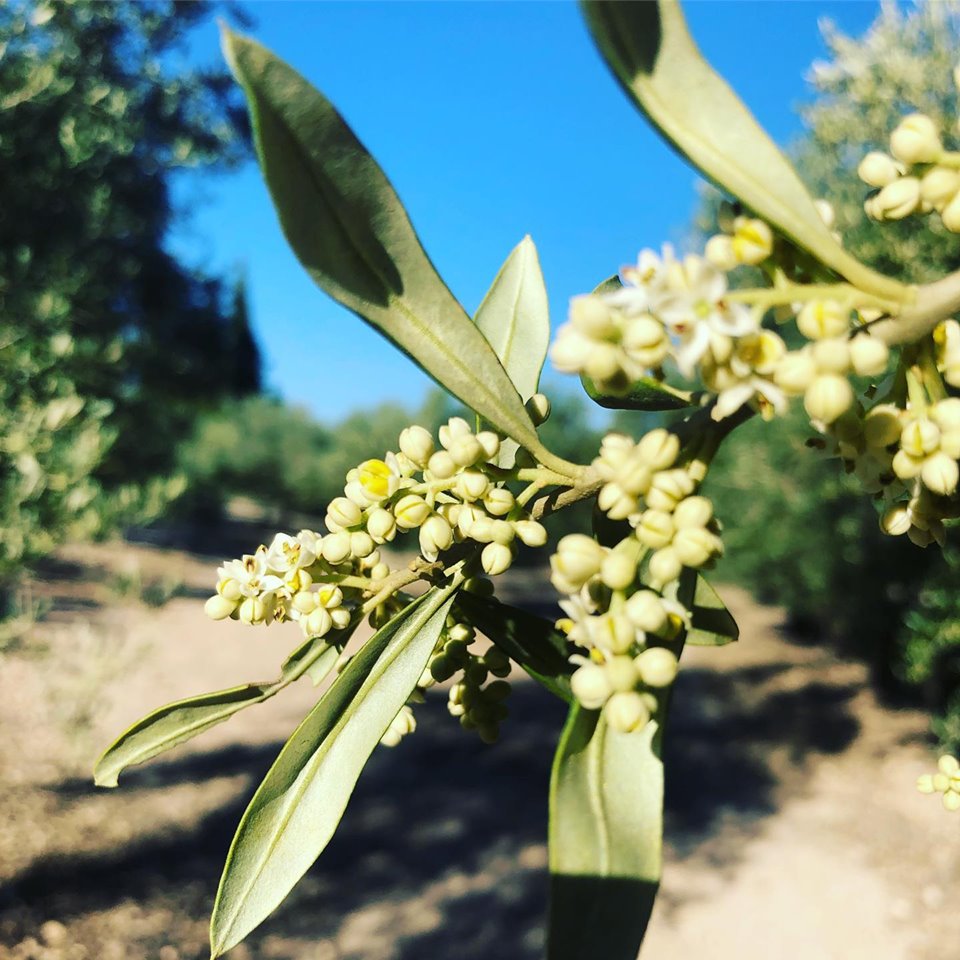 It’s a relatively short stage within the whole process of olive tree cultivation, lasting about three weeks.  It’s the moment of fertilization.

We’e now going to move onto the third stage. It’s when the petals fall off the flowers once the latter have been fertilized.

The tree itself takes care of eliminating those fruits it considers it won’t be able to feed.

In contrast with the rest of Spanish olive groves, at Masía El Altet, we don’t have a dormant period in summer since it’s difficult for temperatures in our olive grove to exceed 30 degrees Centigrade.

With temperatures higher than those just mentioned and relative humidity below 30 %, the olive tree closes its stomata on the under part of the leaf, meaning that only 20% of the total is working. Because of that, in areas where it’s very hot, this dormant period can continue until September when the high temperatures finally start to go down.

At this moment, we can say that the olive has reached adolescence.

This can be seen because the stone has hardened. What we do on the estate, is bite into the olive to discover what the stone is like. This phenomenon occurs during the second half of August.

At Masía El Altet, we use irrigation on the majority of the land without providing all the water needed by the tree.   In this way, we cause slight water-stress.  We never apply this stress in temperatures over 30 degrees and with relatively low humidity. It’s necessary to be constantly on the lookout for possible blights and to act accordingly should they occur.

At Masía El Altet, the ripening stage arrives at the end of the month of October. Since there is no dormant summer period, our olive trees continue to grow during the warmest months, the exact opposite of other olive trees situated in warmer areas, where the trees only work during the first and last hours of the day when temperatures go down. That is, if they do …

It’s at this moment that you can observe the colour of the fruit has changed. From olive green to yellow, from that to maroon and finally to black, indicating the end of the process.

Not all varieties of olive mature at the same time or with the same changes in colour.  For example, the Arbequina variety might seem not to be maturing when it really is, because its greeny-yellow colour doesn’t change during the maturation process. The same happens with the Blanqueta variety, of a light yellow colour, hence its name.

Nevertheless, at Masía El Altet, we collect the olives when they’re starting to change from green to yellow and are slowly taking on colour.  About 1% are dark.

A very important aspect is the speed at which the olive’s maturation occurs.  An olive harvested a week later can alter the quality we’re striving for. We trust our eyes, we bite into the olive slightly so as not to obtain its bitterness but thus obtain information about its organoleptic state.

We don’t use machinery to measure the net oil output. If we did, we wouldn’t collect them since we work with an output of 8.5% the first day (from every 100 Kg collected from the tree, we obtain 8.5 litres of virgin extra) and finish collecting with outputs of 12%.

The need to collect as early as possible

Harvesting on our estate of 70 hectares is finished in 12 days, using 4 inverted umbrella catchers and some 50 ground-sheet workers who come to Masía El Altet at the end of October.  We want to collect as early as possible so that the harvest is as homogenous as possible and on the other hand, to be one step ahead of the dreaded frosts during the month of November.

If instead of having 70 hectares, we had 300, we would only be able to obtain the maximum quality in the first 15 days because from there on, the olive would have matured in excess without obtaining the desired result.

The moment of maturation arrives

After the period of ripening comes maturation.  That means that the fruit has changed colour. We never wait until the olive matures.  If we did, we’d obtain mature oils without their special organoleptic characteristics such as tomato, tomato leaf, green banana, artichoke, kiwi, …

In keeping with what many growers think, there comes a moment in maturation when the olive doesn’t produce more oil and the only thing we do to the tree is use up the reserves of food it has to feed its fruit, thus seriously damaging the following year’s harvest.

The sooner we collect, the more time the tree has to rest before facing starting the cycle over again.

In fact, there are more and more poeple who advise carrying out harvesting as early as possible to avoid oxidation of the fruit and the consequent negative effect on quality.

Besides, it has been demonstrated that this practice is more beneficial for health.

As we said in the previous section, we collect the olives when they are still geen to produce our extra virgin olive oils.  In this way, we obtain oils with the best organoleptic qualities, we avoid periods of frosts and the tree can rest for longer, thus recovering more quickly. We don’t know the dreaded problem of years of alternative production, trees producing more one year and not the following one.

Once harvesting has been finished, the winter stoppage occurs. It’s the rest period for the olive trees until the next cycle begins coinciding with spring. It’s the moment to carry out light pruning so now, let’s speak about this element.

For us, it’s one of the most important moments of the year as we said at the beginning.

With light pruning, we’re starting to prepare what will be the next harvest.  The necessary standards in quality have to be maintained so that we can continue to produce one of the best extra virgin olive oils in the world.

When do we begin? At Masía El Altet, we start just after harvesting which coincides with the month of November.

During this period, the perfect temperatures for this task are registered.  In any case, it’s necessary to carry out this task which is so important for olive tree cultivation before the arrival of spring.  The ideal time for it is before the end of the year.

If severe pruning is carried out and the winter temperatures are really low, below zero several days in a row, the tree can suffer stress, weakening it and leaving it without defence mechanisms. In addition, the tree must be balanced. The same for the top and the trunk.

It’s very delicate work and requires a lot of experience.  It’s all about preparing the tree for the following harvest.

Introducing the changes in the tree which interest us most.

We introduce the changes in the tree which interest us most. We shape the top and leave the ideal leaf density and in this way, we introduce balance into the next production.  Finally, pruning also serves to repair and restore parts of the tree which have been damaged.  In our olive trees, some parts lose their leaves due to the cold and these parts which are not going to produce flowers have got to be pruned.

This is everything we wanted to tell you about olive tree cultivation.  We’ve given you information about all of the stages and their specificities. They’re all equally important in the lead up to the production of a high quality product. We mustn’t forget that the transport process from the groves to the oil mill in the shortest time possible is also of great importance in order to ensure that quality.  From the moment we start collecting at the beginning of the morning until grinding takes place, the time that has elapsed is less than 3 and a half hours.  The technology with which the oil mill is equipped is fundamental in obtaining the maximum quality.

Have you found this post interesting? If so, please don’t hesitate to share it on your social networks. We’d love you to do so.

Below, you can see a graph in which you can see our monthly phenological cycle compared with the great majority of olive groves in Spain.  With it , we can say that our cycle is one of the latest to take place in the country.