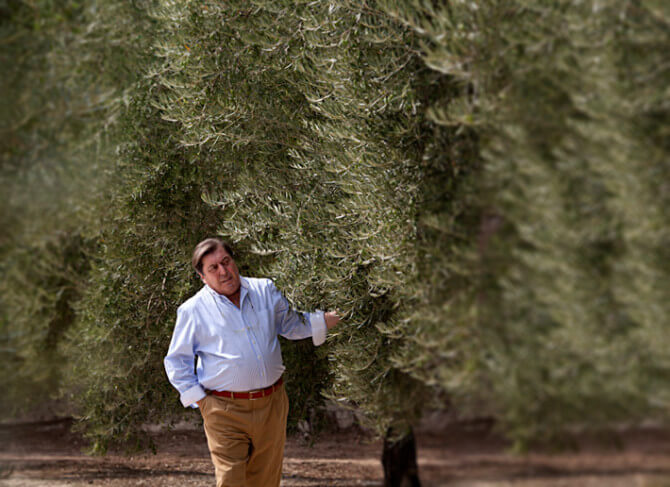 There are about 700 different olive cultivars in the world. All of them, if properly harvested and milled, can yield first-rate oil, and each has its own distinct aromas, flavors and mouth feel. However, only a few dozen varieties are widely grown in Spain and internationally; Jorge Petit’s olives are endangered species with rare, memorable personalities.

Petit grows them at Masía el Altet, his estate nearly a thousand meters up the knife-edged granite peaks of the Sierra de Mariola, just inland from the port city of Alicante. Masía el Altet demonstrates Spain’s wealth of local olive varieties, and the importance of terroir.

Petit and I taste the oils. One shows the resonant, unmistakable scent of truffles, and the other, I swear it, has a whiff of fine cologne. I’ve never tasted oils like these before—and I’ve tasted a lot of oil.

Petit is visibly delighted, not so much by my reaction as by the mysterious alchemy of the oils themselves. “No matter how many times I try them, I’m always amazed,” he says bemusedly. Petit has a barrel chest, a penetrating glance and a sharp, wolfish grin—a grin you wouldn’t want to see on the other side of the table during a business negotiation, but which is a genuine pleasure now, as we sample his oils in twin rows of gleaming balloon glasses.

The blend of Blanqueta and Alfafarenca cultivars really does taste like truffles, no question about it, and as we mumble and slurp it, we pick up hints of alfalfa, lemon and prune, too. The bottling from the Changlot Real cultivar, reminds us of fennel and Green banana in addition to cologne.

The main reason I’ve never experienced oils like this is because I’ve never even heard of these rare local olive varieties. After the tasting, Petit takes me to see his trees. Though it’s mid-May, and baking down on the water at Alicante, the weather in the mountains is damp and cold. The air effervesces with herbs and wildflowers, which Petit identifies as we walk —thyme, marjoram, a wild rosemary, and many others whose Spanish names I don’t recognize.

He tells me that these Sierra de Mariola Mountains, which are protected by two national parks, contain 1,200 different species of plants, including one of the highest concentrations of aromatic and medicinal herbs in Europe.

The surrounding woods are dense, overgrown, dripping with moisture, almost like a cloud forest. When we come upon a clearing with an olive grove, which Petit planted here 18 years ago, it seems out of place. “Can you imagine? An island of olives in a sea of aromatic plants! No wonder the oils they make are so fragrant,” he observes. It’s a gutsy choice to plant an olive grove here, as there is a risk of frost damage each winter.

The payoff is great, though, because huge temperature swings between day and night and from one season to another stress the trees and further enhance the flavors and aromatics of their oils.

Like many protagonists of the olive oil revolution in Spain, Petit made his money elsewhere—he is a successful financier—and turned to olive oil as a passion, bringing an outsider’s objectivity and rigor to a profession laden, even burdened, with tradition.

Yet he speaks about olive oil less as a businessman than as a farmer, or philosopher. “The olive is a wise tree, and has taught me a lot,” he says. “For instance, how to slow down.

Growing trees, gathering their olives, making oil from those olives, tasting the oil they make.” Here, Jorge Petit’s grin seems less wolfish than before. “These are some of my life’s precious things, and cannot be rushed.”