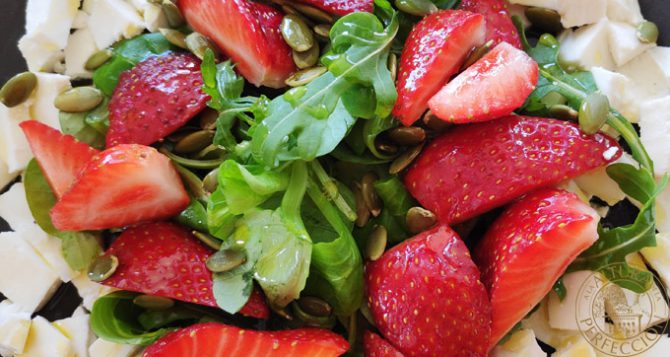 This fresh cheese and strawberry salad is ideal for spring and summer months, though probably better in summer.  And we’re convinced you’re going to like it.

Not only for its taste, which is delicious, but also because it’ll only take you about 20 minutes to prepare.

And when it’s ready, you’ll see that it’s ‘’very aesthetially pleasing’’ if it’s possible to use the expression for a salad.

And you’re also going to be surprised by an unexpected flavour. One that’s produced by the mixture of the cheese, the strawberries, the acorn-fed cured Iberian ham and a honey vinagrette.

Well, if you’re ready, let’s get started on the ingredients and after that, how it’s prepared.

We’d advise you to dress this salad with our Premium oil since it’s the best one to accompany cheese and green vegetables.  And to add another interesting fact: this extra virgin olive oil is used by great chefs in dessert preparation.