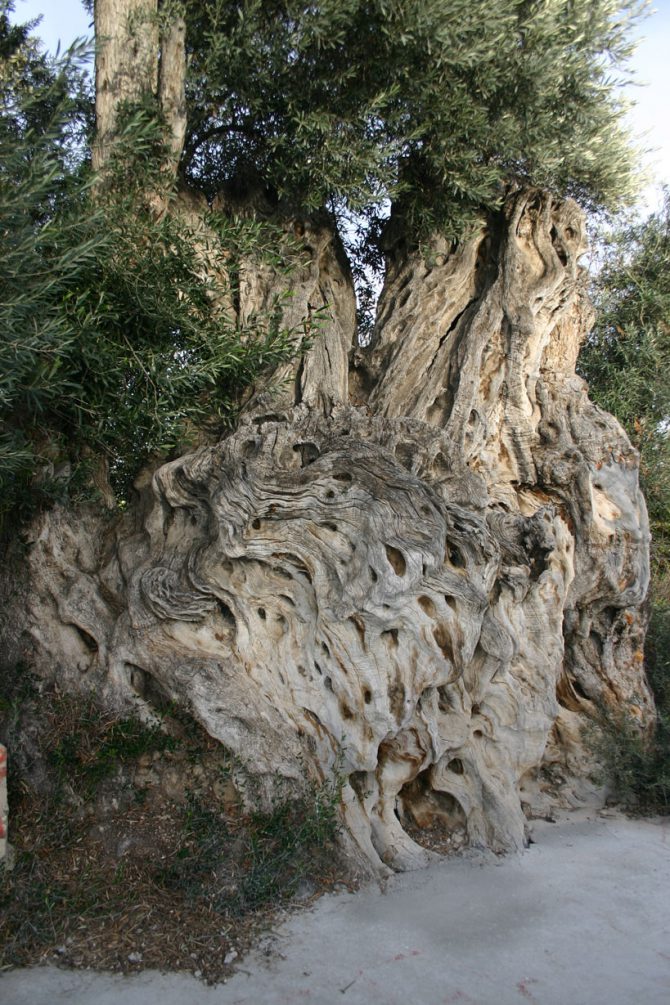 You’ll find all you ever wanted to know about olive trees which are thousands of years old in this post.  We’ll tell you how long they can live with practical examples and the impressive measurements some of them have.  We also have magnificent examples here in Spain.

Have you ever asked yourself why they can live for so long? You’ll also find the answer here.

At Masía El Altet, we’re also really happy to have ones that are hundreds of years old.  We’ll tell you what varieties they belong to.

We’ll talk a bit about the productivity of these trees.

And finally, we’ll invite you to go on a spectacular route to see olive trees. Carry on reading because we’re sure you’re going to love this post about olive trees which are thousands of years old.

How long can olive trees which are thousands of years old live for?

To illustrate this section, about how long olive trees which are thousands of years old can live for, we’re going to talk about two of the most famous trees in the world.

It’s supposed that the oldest olive tree in the world is to be found in Bethlehem, in the village of Al Walaja to be more precise.  Experts from Europe and Japan have determined the existence of an olive tree which is between 4,000 and 5,000 years old. This tree has been named Al Badawi, which means ‘The Great One’.

The Great One is 12 metres high and 25 metres in diameter.  One of the characteristics of olive trees which are thousands of years old is their great dimensions.

Let’s travel to Spain, to a place called Ulldecona in the province of Tarragona, on the border between Catalonia and the Valencian Community.  Here, an olive tree has been dated as being more than 1,700 years old. The name it’s been given is the Farga de Arion and was planted in the year 314 during the rule of the emperor Constantine.

There exist a huge number of olive trees that are hundreds of years old and ones that are  thousands  of  years old.  Their life expectancy is 2,000 years on average. And you can be sure that many more don’t exist simply because of what Man has done, removing them from their natural habitat to make money from them due to their decorative qualities, which are also many.

Why do olive trees which are thousands of years old live so long?

The answer to this question might perhaps surprise you. Olive trees can reach those two thousand years or more because they’re trees which grow slowly. In this sense, they’re similar to the oak, beech or redwood which, even though they come from different families, it’s not surprising to find examples more than a thousand years old.

On the other hand, the olive tree is a very intelligent fruit tree: when the temperature during the summer months rises above 30 degrees Centigrade and relative humidity falls to less than 20%, the olive tree closes its stomas through which it breathes and works at 30% of its full capacity. Due to that, it doesn’t suffer in the slightest and can increase its lifespan.

What however musn’t be forgotten is the the olive tree is a tree which is to be found in the  Mediterranean Region  and it’s not a slow growing tree because it suffers from cold or because of adverse climatic conditions but because in this Meditrranean Region which stretches from Israel to the Iberian Peninsula, the ground in which it grows is very poor in nutrients.

It’s for this reason that the olive tree can’t grow more quickly.  You only have to put it to the test. If you take an olive tree, water it and look after it carefully, you’ll notice its growth year after year.  But if you don’t do this, many decades will need to pass before it turns into a wonderful specimen.

The olive trees which are thousands of years old and to be found here and there in the Mediterranean Region constitute a natural heritage which deserves to be protected.

At Masía El Altet, we don’t have olive trees which are thousands of years old but what we do have are some trees which are more than 200 years old of the Alfafarenca, Blanqueta and Genovesa varieties which we use to produce the coupage of our extra virgin olive oils considered by many specialists as one of the best extra virgin olive oils in the world.

Whatever their age, we are more than aware of the importance of the role the tree plays in achieving an excellent quality olive, the raw material for our extra virgin olive oil and for that reason, we give them all the care and attention they need.

A clear example of this is when it comes to pruning.  Our trees are only pruned by expert hands who know their work to perfection and just after the olives are picked in the month of November. In this way, our olive trees can continue to grow vigorously offering olives of the highest quality.

Having said this, at what age do olive trees produce their best? From our experience, the most productive olive trees are those which are between 30 and 40 years old.

At least they are the ones which have the best average productivity. For olive trees which grow without irrigation, a 100 year-old olive tree normally produces more than it did when it was only 60 years old.

In the case of olive trees which receive irrigation, as is the case at Masía El Altet, the most productive period is reached when the tree is between 50 and 65 years old.

So in summary, we can say that olive trees between 5 and 100 years old are the most productive and which also offer the best quality.  From that age onwards, both productivity and quality decrease. It’s as if the tree had become somewhat sluggish.

(This information has been taken from https://wikifarmer.com/es/cosecha-de-olivos-produccion-de-olivos/)

A fantastic natural heritage: the route of the olive trees

It’s a fantastic natural heritage. For that reason, in this final part of the post, we’d like to encourage you, when you have the opportunity, to go on a route of the olive trees

One of the best is to be found between the Valencian Community, Catalonia and Aragon.  It’s called the Sénia Route.

In total, there are 27 towns (15, Valencian, 3 Aragonese and 9 Catalonian) which share geography, language and culture.

A great opportunity to get to know a little more about olive trees, a tree which is rich in the roots of our Mediterranean culture.  If you’d like more information about this route, click here.

That’s all we wanted to tell you about olive trees which are thousands of years old.  Why they live so long, where the most spectacular are to be found, what their productivity is. We hope you’ve enjoyed this post.  And if you have, would you share it on your social networks? We’d love you to do so.